Fear: Can I Be Honest?

Today was our big art day downtown. It was cool.

If by “cool”, you mean being so worried about getting lost in downtown Oklahoma City that the second you drive north of the Hwy 37 exit, you get a killer migraine. Cool, as in your anxiety disorder kicks back in with a vengeance, and suddenly your car is closing in on you, and giant 18-wheelers are for sure trying to run you off the road and you feel like you’re going to vomit.

And when you actually get where you’re going, you really do worry that that’s exactly what will happen: you have to breathe in slowly through your nose in order to keep from literally barfing, because here you are: out of your element and waaaaay out of your comfort zone, with folks you don’t know, in a place that–you’ve been told by dozens of people–is unsafe.

Did I mention my previous dealings with anxiety? It gets to me sometimes.

It’s not like I’ve never been in neighborhoods like this before. Having kids, though, has changed my perspective on, well…everything.

The place looked pretty happy and wonderful, to be honest. Sunny little house on a quaint little street on a bright and beautiful morning. Painting with the world’s most adorable children in a shady and spacious backyard. Peanut-butter and jelly sandwiches all around.

It’s no different from my everyday.

But what about the kids? Is it their everyday? Who paints with them? Who jump-ropes with them? Who sings and plays and makes lunch with a complete serving of vegetables, everyday, for them? Surely their parents, or a kind grandma, or babysitter?

And what about their moms and dads? Who invites them over for chit-chat and coffee, and who brings them casseroles when everyone in the family has the flu? Who comes over to their house and prays in their driveway after they’ve had a miscarriage? Who can they trust to watch their children in emergencies and who do they turn to in times of tragedy?

I do know that the people who put on this week-long day-camp for the kids in this area did it for a reason. A block away from where we played, women walk the streets, selling their bodies. You can see them at any given time of day. There’s trash, and bars, and hypodermic needles, gangs and violence and abuse.

There are predators. There are people who would seek to “groom” some of the beautiful 10-year-old girls that were painting smiley owls with me today.

And it makes me sick to my stomach. It brings tears to my eyes. I can paint and play and eat lunch and leave it all behind. I will go back to my “lily-white world” 30 minutes away. But what about the people who live in the other houses on that same street? What about the children? What happens to them, when the sun goes down? Where is their retreat? How do they live in fear?

I have to wonder this: They are either 1. miserable, or 2. not afraid.

And if they are not afraid, I wonder if 1. they are distributors of fear, or 2. they have taken every precaution necessary against those that would hurt them, or 3. They are at peace with God and they believe that they are right where they need to be. Or two of those. Or all of them.

I prayed hard on the drive in. I wanted to be calm, cool, and collected. I wanted to be. But I was scared, I really was. I’m about as maniacal as a box of kittens. My street cred is so low that a hardened thug would probably bless my heart and give me a sticker. (I’m counting on that, in fact.)

“Have I not commanded you? Be strong and courageous. Do not be afraid; do not be discouraged, for the Lord your God will be with you wherever you go.” Joshua 1:9

If God told me to paint with these kids, then He was in my car with me today, warding off evil semis and vanquishing my highway enemies. His hand was on my shoulder as I navigated those city streets and He opened the door to the house just as I was about to faint on the front steps.

And if He called these other people to minister to the men, women, and children of this neighborhood every other day of the year, then He is with them when they put on their tennis shoes and hit the streets. He passes out nail polish and encouraging Bible verses and He hugs the prostitutes. And He has the strength to do it all again the next day.

If you couldn’t already tell, today was the first real day I stepped outside of my comfort zone for Jesus. (I should mention that my comfort zone consists of…my house, and maybe the church as long as I’m surrounded by people who I’m used to, and maybe Target–but only the new one, in Norman.)

But I pray that it won’t be the last. I hope they’ll have me back despite my awkwardness and my utter lack of leadership during the painting session.

I also pray it won’t be the hardest place I go. My sister had this to say in response to my idea of one day doing an art camp in Africa or South America with my friends: “What about those people on ‘Locked Up Abroad’ ? You know, you just can’t go to a place that’s not safe.”

(Honestly, I was more concerned with the zombie apocalypse breaking out on the plane ride over the ocean.)

I get it, I do. But I can–I can go. I might be meant to do just that. And when are we truly safe? We could be killed anytime, any place. No one knows what tomorrow brings.

It won’t matter to God in Heaven that we were super smart and graduated from really good colleges. It won’t matter that we stayed away from gluten and drove cars with high safety ratings. It won’t matter what the balance was in our savings account, and God won’t care about our chevron-patterned throw pillows. God will say: “I made you strong–did you help people who were weak? I gave you the ability to speak and write–did you tell people about Me? I put a sadness in your heart for orphans–did you adopt? I made you creative–did you share that gift with others?”

I so often waste my gifts and blessings and strengths. But today, I was right where I needed to be. We sang songs. We played games. We ate lunch and painted pictures, and we hunted eggs. Mia and Merrick popped confetti all over themselves and me and the other kids. People were smiling, laughing. It was a good day. 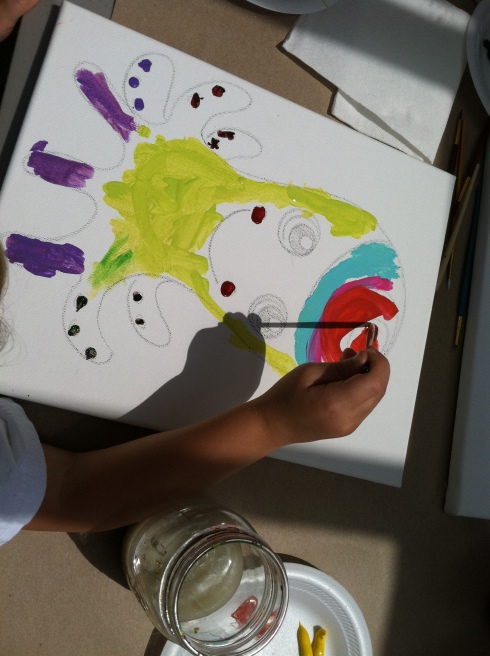 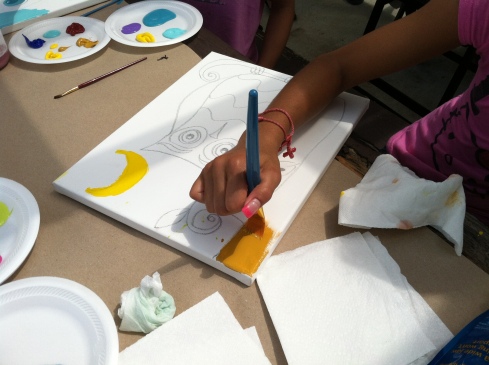 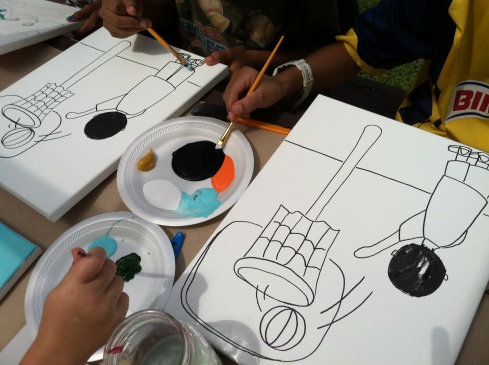 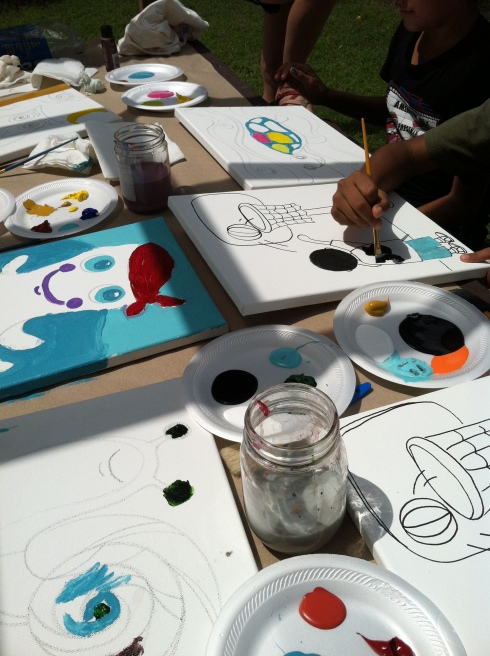 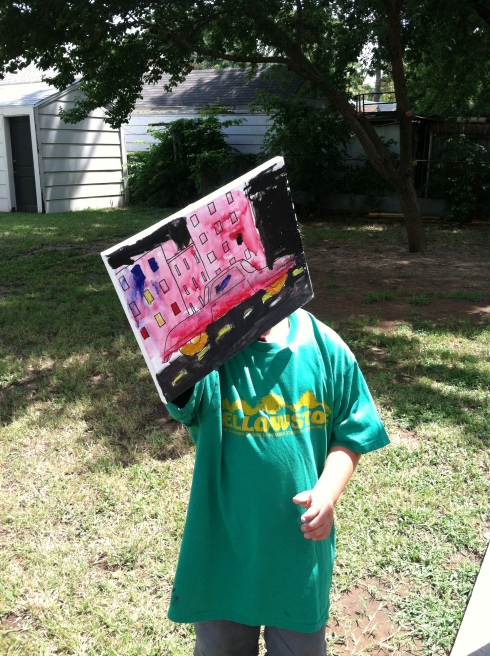 We’ll be picking confetti out of our scalps for years to come.

Today I finally met the kids that I have been thinking about and praying for since March. Only now I will be praying for them by name, with their beautiful faces in mind.

Thank you to everyone who helped make this painting party possible by participating in art lessons this month. We earned enough to buy supplies for today and for Friday, with some canvasses and paints left over for the community center to keep on hand. Art for you=art for them. Great job!

Mom. Wife. Artist. I take care of the kids and pretend to clean sometimes. I can cook spagetti and I have never been arrested. END_OF_DOCUMENT_TOKEN_TO_BE_REPLACED
This entry was posted on Wednesday, July 17th, 2013 at 10:59 PM and tagged with art, art parties for at-risk kids, Christ-like love, Christianity, Church, Faith, God, God's will, inspiration for painting, Jesus, kids art, kids art classes, listening to God, okc art parties, original paintings, out of my comfort zone, painting, trusting God, worrying and posted in Behind the Painting, God Stuff, Uncategorized. You can follow any responses to this entry through the RSS 2.0 feed.
« My Dog and Art Students and A Visitor
A Typical Summer Day »