After 4 long–and I’m talking LONG–months of personal restraint and self-control, I bit my nails. Like, I bit them clean off. I had come so far! I’ve been a nail-biter since I was 3 (truestoryaskmymother) and it was assumed that they had ceased to grow completely. But behold the power of a good prenatal vitamin and a superstition based in nothing but my own crazy head! By mid-February I had grown me some pretty fierce she-claws. Unfortunately, during this past bed-ridden Sunday afternoon, boredom and anxiety teamed up and became one great big mega-force to be reckoned with, and what started with the innocent nibbling of a thumbnail quickly progressed to an all-out war against my own hands.

I got gnarly man nubs again.

Though it feels really good to be biting my nails again, I am so angry with my self. I said “Self! Where’s your will power?” But my self never answers back, so I’m left to ponder, and probably over-spiritualize, the religious themes of The Walking Dead.

It is so easy to slip back into bad habits. Look at precious Darryl Dixon: 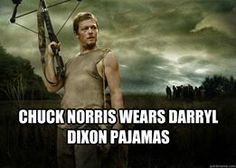 No really, look at him–so much awesome. For those of you who don’t watch, a little background information may be in order: pre-zombie-apocalypse, Darryl was a swampy white-trash redneck who drank moonshine, lived in the woods, and pretty much did whatever he wanted. Suddenly, zombies! Darryl Dixon met up with a group of survivors, and all of them became dependent upon his “Man-vs-Wild”-style expertise. The group was constantly in situations that called for Darryl to step up and be a protector and a leader. He made real connections with people. He became a hero.

Then that band of survivors got separated, and Darryl was roped into another group–this one made up of some real meanies: thieves, killers, and liars, who “claimed” things for themselves. Darryl stood firm in his struggle to be a good, fair person in a world that’s kill or be killed: “I ain’t claimin’ nothin‘,” he asserted, even if it meant going hungry or sleeping on concrete.

Sadly, by the end of one episode, Darryl (at least temporarily) gave up. He saw the body of an enemy and instead of respectfully covering it with a sheet (like Good Darryl would’ve done), he tossed the sheet aside. He gulped down moonshine. And he “claimed” things.

So much for fighting the good fight.

I wonder a few things:

And then I wonder a few things more:

“…pursue righteousness, godliness, faith, love, perseverance and gentleness. Fight the good fight of the faith; take hold of the eternal life to which you were called…” –1 Timothy 6:11-12

Mom. Wife. Artist. I take care of the kids and pretend to clean sometimes. I can cook spagetti and I have never been arrested. END_OF_DOCUMENT_TOKEN_TO_BE_REPLACED
This entry was posted on Friday, April 4th, 2014 at 8:15 PM and tagged with Alcoholism, anxiety, Faith, prayer, religious themes in the walking dead, spiritual struggles and posted in God Stuff, Uncategorized. You can follow any responses to this entry through the RSS 2.0 feed.
« art update and also house and baby stuff.
Naming a Human, part 890. »